The cracks are appearing

This is what I hear all the time.  There are times when I doubt his diagnosis, when I doubt my concerns and myself.  And then there are times when his autism is glaringly obvious, when he doesn't recognize someone he's known for over a year because they had a shave, when he refuses to speak to someone randomly because it's a new environment, or when he's almost reduced to tears because something minor didn't go exactly to his plan.  In those moments I know he is not coping, not fine or ok.

But what do you do when school invariably tell you he's ok, that the SENCO doesn't really need to see you, they have no concerns?  It all sounds great, except Logan invariably doesn't want to go to school, he's started saying he has a stomach ache again before school.  He gets upset that he doesn't get the level of praise that he sees other children getting, not that I think he should get more or less than he deserves but he is driven by praise.

This week I saw a glimmer of hope in the shape of a CAT worker (Communication Autism Team.) Having a diagnosis of autism in Birmingham means that you "should" automatically get assigned a CAT worker once your child is in school. Like anything relating to schools and autism there are the good and the...not so good.  Ours is great, heralded even. People hear of ours from different areas and are jealous. During reception Logan only had one class visit with him, the teachers reported very few concerns and really he was fitting in superbly, not forgetting the fact that his teacher has an autistic son "just like Logan" so she got him.  He liked her a lot.

Fast forward to this school year and he had a visit last week, once again I was told that the school had informed him that there were no concerns.  In the grand scheme of things I guess there aren't, he can read and write at an age appropriate level, he doesn't cause trouble or stand out.  Then I spotted this line in his report, I couldn't have put it better myself: 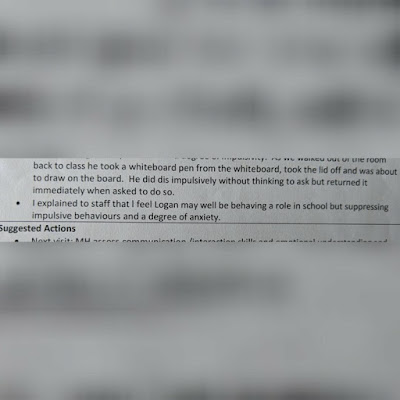 I need to address it with school but I don't really know what to say, there were lots of other snippets of information in the report regarding his immaturity in emotional/social situations as well as him not being able to express himself. I know it needs to be addressed but I think I need to have a plan, I need to know what outcome I want to see happen next.  Fobbing me off is easy, I need an outcome that I can see and measure so that at the next 3 minute parents evening I hear more than: "He's doing well."