The day I was accused of hurting my children

I knew a woman once, we met as extras on a film set years ago in what now feels like another life. We only ever met for one day but we really got on so did the usual and added each other on Facebook. Our lives took totally different paths but we politely stayed in contact commenting on photos and wishing happy birthdays but other than that we were strangers and had no impact on each other.
I drifted around until I had my children and moved back to the UK, I made no secret of my daughter's autism diagnosis and then when my son went through the same diagnostic process I was equally transparent about it. Everybody was so supportive we were so lucky but in some ways I think it shielded us from the ignorance of many.
My (Facebook) friend is now an alternative health blogger who has a propensity for some of the more... erm...controversial conspiracy theories in health. I generally didn't read her work but one piece on the old MMR caught my eye, I made the mistake of commenting saying that I immunised both of my children and would do it all again. I like to have faith in our medical system and although sometimes mistakes can be made with the information that I have been given I will always protect my children from serious diseases.
That's when this happened. A tirade of vitriol and spite, people I don't know mocked me for protecting my children. The long posts stating that I'm in denial, that it's doubtful they were born with autism and that my child will get "worse and worse"
People are entitled to their own opinions and I am one of those people. I don't get involved in discussions regarding the MMR now, I know what I believe and I know others differ. I don't really care. When I look back now my children, particularly my daughter showed distinct signs from very tiny. She was hard to engage, it was difficult to make her laugh yet she would cry for hours for no real reason. Her sleep was always a source of concern (and is still one at almost 6 years old.) Maybe I am wrong and the the combination of immunisations had an effect, maybe the fact that I worked in a rock bar while I was pregnant (might explain those heavy metals!) played a part, maybe I drank too much milk or got too much sunlight (I lived in Spain!) Does it matter? We all get through our days just fine without thinking "Why her?" "Why him?" Why do other people care?
Posted by Mysquarepeglifeblog at 05:26 No comments:

Bella is nearly 6 and is still massively self directed, not in a "she knows her mind" kind of way but in more of a one track mind, she'll punch you if you try and direct her kind of way. Getting her to do her homework can be a struggle which is infuriating as when she settles down to it it takes her seconds to complete the task. She rarely wants to draw or paint and to be honest I have to hide everything to stop her drawing on the walls, carpets and more often than not her own face.
Creative tasks happen when I have the time to oversee it like you would with a 3 foot high 18 month old. She is so smart academically but has no idea that painting the walls or her brother is anything but funny. Over the holidays we had a few creative/sensory times but honestly they always last about three minutes before the brown coloured paint hits the fan and I have to rapidly wrap it all up! 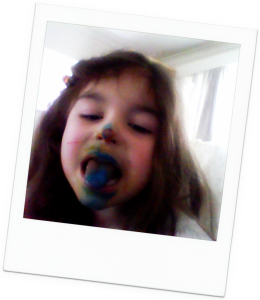 Logan (at 4) is more interested in sensory play and painting/playdoh/sand etc but we have to work it around when Bella is preoccupied so as you can guess it happens few and far between!
We managed giant water beads which both loved however Bella's first instinct was to overarm it at the wall which resulted in a shower of what looked like nappy filling! Logan was distraught and we had to put it away until we could play safer in the bath which was fun as in water they're almost transparent. We'll definitely be doing that again. We also did mirror painting which both enjoyed and is a good exercise in getting some through mirror eye-contact if your little one struggles with it. Inevitably it didn't last long before Bella started eating paint but she had a go for a while. 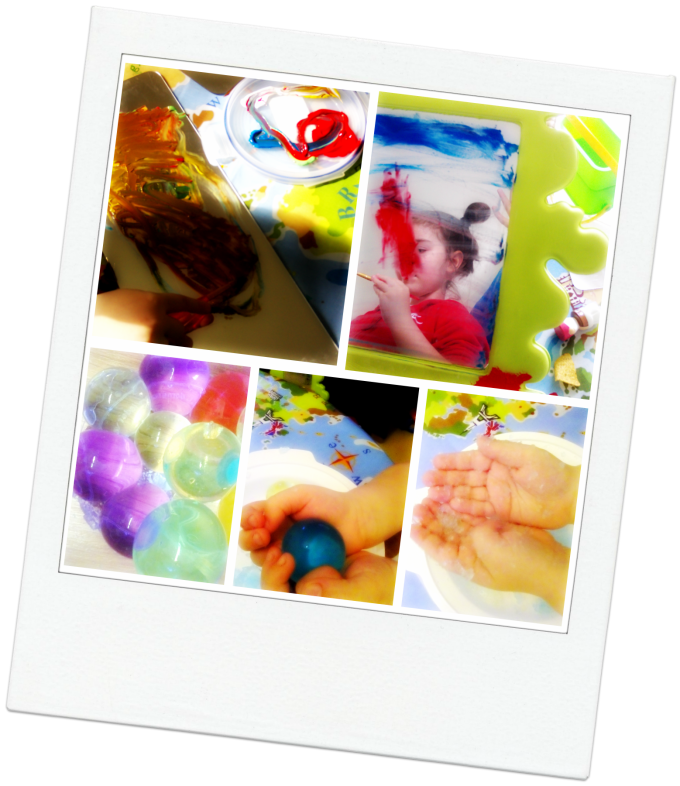 I know I should be trying harder...actually scrap that I'm doing more than I normally do and more than I want to do. I like crafts in the bath, contained mess is the best kind if there has to be any and I'm bowing to societal pressure. I don't remember doing "crafts" as a kid, I played with toys, was self-directed. Now I know Bella's direction is a bit further afield than mine was but that doesn't mean it's a bad direction. So this is me putting my metaphorical foot down against the Pinterest army who make all us Mum's that don't craft and buy in birthday cakes feel bad.
We are good enough!
There you go, don't feel bad if you're not crafting/messy/sensory play everyday because you don't have time (and really who does)or because your kids eat too much papier mache to be healthy. It's ok... they do plenty at school surely?
Posted by Mysquarepeglifeblog at 05:37 No comments: