Questions to an Autism Mama

I thought I would do a series on answering some of the questions that people might want to ask but maybe not know how to ask an Autism parent like myself.  My responses are simply that my responses! I don’t speak for anyone else and know first hand that many other parents of children on the spectrum feel very differently and some think the same, so here we go
. 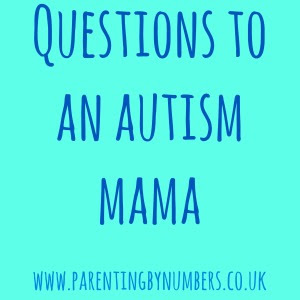 Q. What is Autism?
A. Autism is a very complex, very personal diagnosis which affects every person differently.  There are traits which show up regularly, poor social interaction, lack of eye contact, delayed speech, obsessive behaviour but these are traits and not criteria for diagnosis. Every diagnosis is different, my daughter for instance struggles to interact and communicate with the outside world, she lives in her own little bubble and on the whole is pretty content (until it all goes spectacularly wrong!).  Other children don’t sleep, at all. Others self harm, some appear to have nothing 'wrong' and only when they collapse into a public meltdown to people see what is going on inside (my son.). To put it bluntly people with autism are wired differently, not necessarily wrongly just differently and as long as you work out the glitches you can live with it just fine.
Some use the "It's like being a Mac in a PC world" analogy which is good for us as I don't understand Macs at all!
Q. What causes Autism?
A. We don’t know is the short answer. There are theories, hundreds of theories from  to low birth weight probably all the way down to women eating jam during pregnancy.  You get the gist, most theories involve pointing fingers at parents. I personally think like many people that it's genetic, both of my children have degrees of autism and they have cousins on both side who have it. They also have a dad with Bi-Polar and that is connected quite closely to the spectrum.
Q. Would you want a cure?
A. This is a tough one for me, my children and their Autism are so delicately intertwined that I have no idea where one starts and the other stops.  It is not like a tumour which you cut away and leave the original child in tact (not that I'm comparing ASD to a deadly illness!).  I would have no idea who they would be without their quirks, both good and bad. I think a cure sounds quite scary in all honesty as it kinds of hints at Hitler's ethnic cleansing, getting rid of anyone who doesn't conform. Autistic minds have been moving the world forward for years creatively and technically. The world would be a worse place without them...however...people with autism have been found to die younger due to associated health problems and more scarily high rates of suicide! The extreme end of autism includes co-morbid mental health diagnosis such as Bipolar, Psychosis, Eating Disorders and more. These can lead to violence towards themselves and others and I can imagine the people struggling with all this and their parents wish for a cure everyday.
It's a tricky one, everyone is so different. 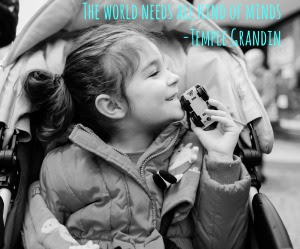 Q. Do some people use the “Autism” label to detract from bad parenting?
A. Probably, I can’t speak for anyone personally but I am sure there are people who would rather have their child diagnosed the Autism or ADHD than face up to their shortcomings as a parent.  I should probably mention that getting a diagnosis for many people seems near impossible so anyone who actually starts on this route for the wrong reasons need a ‘check up’ themselves.
On the flip-side having a special needs child’s doesn’t mean you can slip into bad parenting techniques and it doesn’t mean that they can’t be naughty. Both of mine regularly do things they know they shouldn't but the way I deal with them differs to suit their understanding. Autism is a diagnosis not an excuse.
Q. Do Autistic people have a "special gift?"
A. Generally no, being a savant is extremely rare. Autism can often present with a variety of learning disabilities as well as communication difficulties so asking a parent of these children "Ooh are they good at Maths?" may not generate a particularly positive reaction. I personally have two children one who has severe communication difficulties and is considered at the severe end of the spectrum...she learnt to read at age two by rote and learnt her times tables the same way (clever yes, savant...probably not.) I also have a child at the polar opposite end of the spectrum who can talk, interact and on the whole doesn't appear "typically" autistic, he is struggling with the basics of phonics (which isn't unusual for his age but it's clearly not savant!)

Q. Will your child grow out of it?
A. No. Hopefully she will grow with it, as will I as a parent and her advocate.
If your child grows out of their autism I would argue as to whether they had it to start with.
Q. Would you be offended if I asked you these questions to your face?
A. No, I’d be offended if you whispered about me and my family to other people. I’ll also be less than appreciative if you start telling me about autism because your ‘sisters, husbands, ex-wife knew someone with ASD.’ Unless you live with my children day in day out you know nothing about their autism.
Some of this might sound harsh or bleak but it’s not its intention, knowledge is power and to have real Autism Acceptance we need to be able to have honest conversations. Feel free to comment with any thoughts or questions of your own

Posted by Mysquarepeglifeblog at 06:12 No comments: