Christmas On The Spectrum

Christmas is a stressful time of year for everyone, when your children are on the autism spectrum it adds a whole new layer of stress.  Bella doesn't really do presents and she really doesn't do wrapping paper so it's always good fun being asked for the 100th time "What does Bella want for Christmas?"

The reality is that she wants an iPad, unlimited Nutella and all the Doritos she can eat...and you know what? That's what I'm getting her! I've also got her a few miniature figures which she likes and some Tellytubbies headbands, other than that I'm sticking to what I know she'll like and why not?  She isn't like a regular 7 year old so why would I treat her like one? Why would I buy her piles of presents that she isn't interested in and doesn't want? I wonder if it makes people feel better about her condition, if buying her a present and wrapping it up makes other people feel more "normal."  Well that's not our normal, in our house Santa knows that Bella doesn't like wrapping paper and he knows that she likes to be able to see her presents when she comes in the room. He also knows that toys don't need to be "age appropriate" what does that even mean anyway? I love that Tellytubbies make her so happy she flaps her arms with excitement, she didn't actually watch them as a toddler so fairly new for us, who doesn't love Frozen (I certainly do) and Toy Story has never managed to get old in the 6 years we've been watching it.

With Logan it's about managing his expectations, he is so black and white (as many near 6 year olds are) and expects that Santa can bring him anything he wants as his elves just make it.  He wants everything he see's and without expectation management there would be definite disappointment. Luckily (not many people see it as a positive) his birthday is days before Christmas so I get to splurge a bit more but spread it over the two events. I usually try and get him the gifts he's asked for for his birthday and then all his Christmas presents are like a bonus round. He thinks all presents in December come from Santa anyway.

He is much easier to buy for anyway as he has so many big interests, Marvel, DC, Pokemon, Star Wars as well as recent films Cars, Inside Out, Trolls...with him the list is endless. He's also quite a fan of clothes so I never struggle with ideas for this one.

"Who is to say what makes them happy? Oh yes...they are!"


My biggest tip at this time of year is to speak to the parents and listen to them! They know better than anyone what their children want/don't want. Maybe they don't want anything, maybe they want a jar of peanut butter, a deck of cards or a pair of white socks. Who is to say what makes them happy? Oh yes...they are! The autistic person themselves, whether they are verbal, non verbal, use PECs, Makaton or the old hand grab, they know what they want better than anyone and the next best advocate is their parents. If they say "Don't wrap it up as it'll freak them out" then don't! If they ask you to remove all the fiddly plastic wires and make sure it has batteries then do that too. 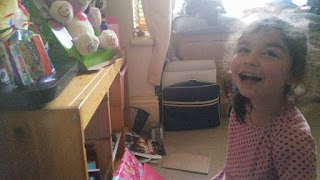 Many parents worry that some children on the spectrum miss out on the magic of Christmas, that the magic just passes them by or worse it overwhelms and upsets them. So how about we listen to autistic people and give them what they actually want this year.
Posted by Mysquarepeglifeblog at 04:04 4 comments: