The Ripple In The Pond

As of late in the Square Peg house it has all been fairly plain sailing. Both kids went back to school without any sort of song or dance and it's quite frankly been unnervingly serene. Logan has had a flying start back, he's settled in, been excited and engaged and has even started an after school club which he now attends alone after a settling in period. 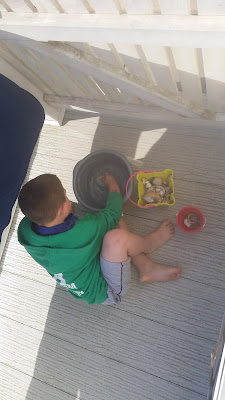 All of his usual anxiety has been shelved and he's been living life like any regular kid. And then the washing machine broke down... On the face of it this doesn't seem
like something that would bother most five year olds and for the most part Logan didn't bat an eyelid. That was until he didn't have a damn school jumper and had to wear a Square Peg Zip-up. It's actually one of his favourites... but its green and his uniform is blue, it's a zip up when his uniform is a sweatshirt.

The journey to school, (which takes about 45 minutes by foot and train) started out wobbly but nothing too dramatic. He was unhappy about the suggestion of the anti-establishment outerwear but as it was covered by his coat he jumped on his scooter and away we went.

As the school came into
sight he became visibly distressed. He slowed right down and used every excuse in his arsenal to take off the offending zip-up.
"I don't need it"
"I'm too warm"
"It's not uniform"
"I'll be different.

Oh hello anxiety, we haven't missed you. I reassured him as best I could that I'd speak to his teacher and that all would be well. He looked at me all doe-eyed and I knew my words weren't hitting the spot. As it happened on the way in we bumped into the headteacher. I relayed the whole story and she told Logan it was fine and that she would go with him into his class to make sure his teachers knew.I left school knowing he wast unhappy but what more could I do? I hoped that the headteacher,or the boss of the school as Logan sees her giving him the OK would ease his worries. 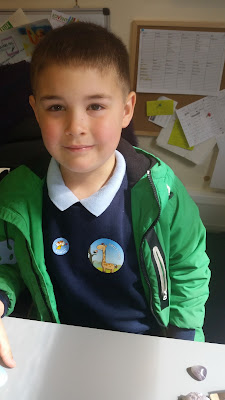 When I returned to collect him at ten past three he was waiting for me at the window chewing his green zip-up but wearing a school jumper. It seems he was outwardly uncomfortable even after receiving the headteachers blessing, so a kind TA took pity and searched out a jumper from lost property. Its not a major thing and it was easily remedied but its just a little reminder of his autism bubbling below his neurotypical surface.

Two days later the laces snapped on his DM's on the way into school meaning I carelessly suggested he change into his P.E. pumps for the day. Obviously
this sent him into a shutdown blocking my voice and his teaches voice and just repeating"I don't want to wear my pumps, pumps are for PE."
I obviously didn't let it lie and reiterated that he could've had an accident but I don't in all honesty think he cared. I was asking him to do something different and unexpected and quite frankly he couldn't cope.

He walked in in a bit of a trance only once looking back at me with his pain etched on his face. I obviously then ran around every shop in the vicinity to source a new set of laces before delivering them to school. The thought of him spending the day feeling that sad broke my heart.

As it turns out he never did change into his P.E pumps when he got into class. When I asked why he said succinctly "Pumps are for P. E." He had a point.

Since I started writing this post a couple of days ago he has told me twice that he doesn't want to go to tennis after school. Once because he dislikes missing his daily trip after school to Nanny's (and the treats that ensue) and another time because he doesn't like me not being there for him at the end of that with the other parents.

Me being able to sense his needs and preempt his anxiety means that I manage him well and this is the reason he isn't under any professionals and why he is considered "normal" by DLA. Twice we've been refused and I'm done with it now, I'm saving my energy for his sisters renewal next year.

I guess variety isn't always the spice of life
Posted by Mysquarepeglifeblog at 05:56 No comments: