Logan wants a lot for Christmas, not surprising as his birthday is 4 days before so his wish-lists always tent to combine into one.  Transformers, a Lego train and a Paw Patrol teddy (pillow pal) are on his list.  This morning he added a "Bubble Bee from Transformers dressing up costume" as his best friend George has one.  I do wonder how much he will play with said toys as he tends to only ever want to play on the iPad or watch TV to my utter frustration.  Sporadically I will walk in and see him playing with a toy, fully engrossed, making up a little story and my heart sings.  It's not very often however.  Most of the time I have a chorus of "what can I watch" on repeat as I try and hold off on the screen time for as long as I can.


Bella wants for very little, at least as far as I know. She doesn't verbalize wants really beyond things that she has already "iPad, nuttella, chippies." It's not the sort of Christmas list most children write. Two years ago I joked that I should get Bella a T-shirt which says "All I want for Christmas is You...Tube" as she was going though a little stage of playing the Mariah Carey song intro over and over and over again on the iPad.  She actually wasn't watching YouTube at the time but the opening to the Gavin and Stacey Christmas special which I had on iTunes.  The sentiment was still true, Bella loves YouTube.

Now, two years later so does Logan. I am pretty sure Logan would struggle to decide between him opening presents and watching other children do it online, (I know which is cheaper for me!)  Well it was about time I got this design made up, and what better than a special interest Christmas jumper! 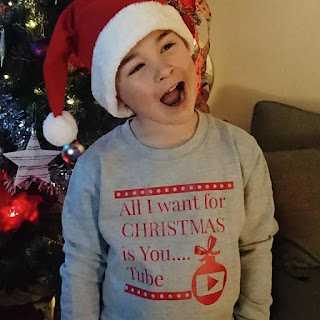 As soon as I listed this on the website it sold out and I had to restock, it seems I am not alone to have YouTube obsessed children...although saying that we've also sold quite a few adults too!

What do you think?