On Saturday 3rd December we ran Square Peg Foundation's first Sensory Santa session. I was nervous. I'm always nervous, I always see 101 things that could go wrong...and I'm a perfectionist, if everything isn't just right...well I strop. My mission was magic and nothing short of that would do! Fairy lights were strewn around the building we were using (then I panic about health and safety,) Santa's beard was changed three times to ensure a "realistic" look and the contents of our goody bags were constantly added to so that nobody was disappointed.

We are really lucky to have some fantastic volunteers (other than my Mum and I) helping out as without them Saturday would have fallen flat.  They came in weekly to pack bags, run errands and even took jobs home to do.  On the day they were dressed as Elves chatting to parents taking the pressure off us.

I can honestly say that I never would have expected it to go as well as it did, every single family loved it and thanked us all for a "low pressure" Santa experience which was just what we hoped it would be. The day consisted of 1 hour arts and crafts/ sensory play/watching iPads/sitting under tables/eating crisps followed by a 15 minute Santa session in the mobile sensory room. 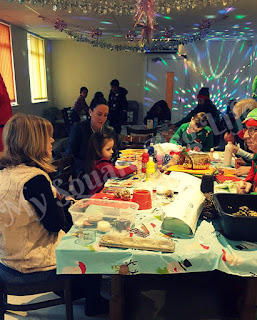 The feedback about our Santa was phenomenal and rightly so.  He, (who also happens to be my ex and the children's Dad) managed to get even the most cautious of child speaking which shocked many parents.  Our Santa has a vast knowledge of Pokemon and Star Wars which impressed many of our ASD guests.

Last Saturday we ran it again and introduced a whole new group of children to our Sensory Santa including my own two.  Bella took very notice of the Big Man and Logan was probably the most resistant of all children over the last two weeks. Typical! He is very scared of Father Christmas but at least this time he was in a familiar environment so he wasn't shaking like a rabbit in headlights. 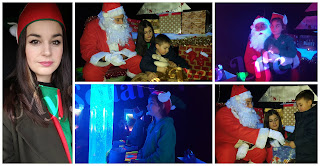 There was some concern that if he twigged Santa was his Dad that we may ruin Christmas for him forever but thankfully that didn't happen.  In fact he told me just today that the Father Christmas in the "Bubble Van" was actually the real one as opposed to the one at the garden centre which he branded a "fake" because he scared him. Magic achieved!

Next week is our final and busiest week and I'm so looking forward to it, and can't wait to do it all over again next year: people have already said they want to re-book!
Posted by Mysquarepeglifeblog at 04:57