A poorly kind of week

Bella has been poorly this weekend with a high temperature and possible sore throat. That's the worst thing about having a child with communication difficulties it's all a guessing game. When she's poorly she takes her self off to bed and stays there. She is quiet, she gets into no trouble. It's all a bit disconcerting. 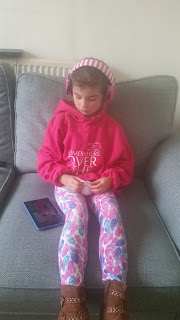 The other difficulty is that she won't take medicine at all, and no I can't hide it in drinks or yogurts as she can sniff it out like a hound dog. For years I struggled to get her temperatures and illnesses under control and battled with medical professionals telling me to "use force."  Ha ok, this girl is a force of nature and no amount of being held down and having calpol squirted down her throat would result in anything other than her being sick.

Then one day when we were in hospital being patronised by a consultant  (after the nurses and on call doctors couldn't get close enough to Bella's mouth to examine her toncills) She asked why we don't use paracetamol suppositories....Well because at age six no doctor had ever mentioned such a thing and I am not exactly medically trained. Apparently as parents we're meant to be psychic enough to know what medications are available but not too psychic as to undermine the professionals themselves. It's a massive juggling act.

Aaaanyway suppositories have changed our life. When Bella is really poorly I can usually manage a swift suppository insert during a nappy change without too much resistance and getting proper pain killer in her is a game changer.

SO IF YOU DON'T KNOW ABOUT THEM ASK YOUR GP  😊

#autism
Posted by Mysquarepeglifeblog at 03:49