Logan, as all siblings has grown up in the shadow of his older sister.  Everything she does leaves an imprint on him greater than my words.  For years they shared a bedroom out of necessity but also I suspect out of a secret longing of his to have a closeness to Bella.  This feeling isn't reciprocated and is one of the reasons we needed to move to a larger house splitting them up.  He still asks me why he can't share with Bella anymore and it makes my heart sad as I feel I'm physically and emotionally putting up yet another wall between them. He doesn't remember how she would wake him in the night singing or banging the walls, he doesn't remember all the nights she climbed onto him as if he were nothing more than the duvet on top of him so she could pillage his toys as he slept.  He doesn't remember crying when she got in his bed and kicked him out or that she'd turn the light on at 4am making his eyes sting.  For now I'm happy for him not to remember but the imprint both positive and negative are made and sometimes they are very clear to see. 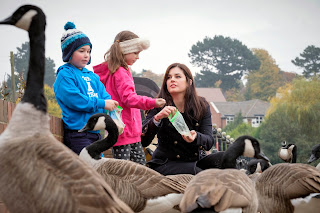 Bella has always needed visual and aural stimulation constantly from when she was a baby, this includes when she goes to sleep at night. For quite a while they shared a TV and as an infant Logan was happy to let her rule the roost watching the same film every night, sometimes for weeks.  As he got older this obviously became quite the bone of contention and in came the iPads.  This meant that both children were independent to choose their own entertainment while staying together in proximity.  This was how it stayed until we moved and they split up.

Ideally Logan would go to bed at 7.30, I would read a quick story then give him a kiss, pop the light off and he would drift off to sleep without too much bother.  Unfortunately you can't quickly undo learning that has taken place over 5 years in the blink of an eye.  Bella has never been a fan of bedtime stories and whist she loves a few books being read to her it is hit and miss and this trait filtered down to her brother.  A month or so back I downloaded a few Julia Donaldson books to my Audible account and it became the rule that a story had to be listened to in full before he drifted off into the triviality of YouTube.  It was a battle at first, he honestly thought it was a punishment that I was inflicting on him.  Slowly but surely he was won over by Stick Man and Super Worm and even looked forward to his evening stories, so just as he got comfortable I  changed it up meaning he got an hour of YouTube and then a story.  Once again this was my way of torturing him. I'm a terrible Mummy!

Less than a week ago he came in to me, I could hear Bella still singing in her room and see a very sleepy Logan standing in front of me.  "Mummy I think I'll listen to my story now."  He was tired and obviously wanted to sleep, this was a moment like one I've never seen. He is your classic tiredness fighter often staying away way past 11.  I looked at the clock, it was 8.30pm.

This week I downloaded the digital copy of The Enchanted Wood by Enid Blyton. I'm not sure why I chose that title, I've never read it but I know it was one of my Mom's favourites. I read him the first chapter, he fidgeted badly like there were pins in his bed.  I began to despair wondering why on earth I had thought this was a good idea.  One chapter was enough for both of us.  The next night on the way up to bed Logan asked, "Will we read the book about Joe, Beth and the tree again." Gobsmacked is one word for what I was, not only had he been listening but he'd taken it in and remembered it (I'm not sure I'd have recalled the name.) 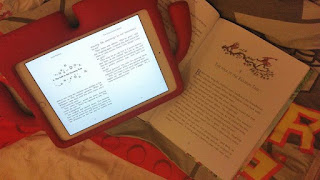 So we did, two chapters this time. He requested the second and was calmer for the most part. Yesterday I bought the hard copy, Logan's first full length book.  He was so excited although a bit confused that we weren't using the iPad as well.

For the first time ever I had a child drift off to sleep as I read, I tried to stop and he stirred "Don't stop, I want you to read it while I sleep." 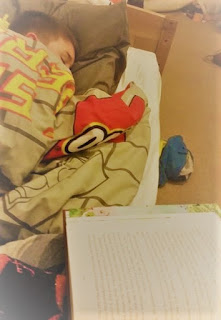 And we all lived happily ever after...well actually I then went and sorted Bella out, had my dinner and crashed out in front of Netflix but close enough.