I've been very wary about wading into the debate that was recently addressed in the Supreme Court regarding who should take priority on public transport: wheelchairs or pushchairs.


"The case was triggered when Mr Paulley, from Wetherby, West Yorkshire, attempted to board a bus operated by FirstGroup which had a sign saying: "Please give up this space if needed for a wheelchair user."

Mr Paulley was left at the stop because a woman with a sleeping baby in a pushchair refused to move out of the designated area when asked by the bus driver. She said the buggy would not fold.
He had argued FirstGroup's "requesting, not requiring" policy was discriminatory."  BBC News website


Now in an ideal world there would be room for all and this wouldn't even be an issue...but it is. 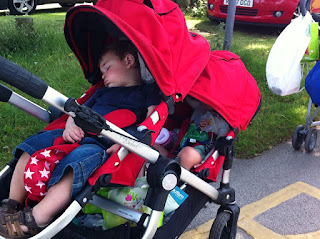 I personally have quite strong feelings on both sides of the argument so find it near impossible to take a definitive stance on the issue.  First of all I would like to clarify that my heart and gut is screaming out that "of course wheelchair users should take priority," but my head has other concerns.  Secondly I'd like to add that I am a parent to two children, one of whom is now at age 6 in a disability buggy/wheelchair so I have witnessed transport as a single and double buggy user as well as a carer to a child in  wheelchair.  I know how hard it is on both sides and have on several occasions been left in tears on a train platform after a lack of consideration as well as provision.

Five years ago I had Bella (18 months) who was pre-observation for Autism, so she was just a "difficult" toddler in the eyes of the public, I was also heavily pregnant.  Taking Bella on public transport was and is to this day dependent on me being able to keep her in her pushchair. Bella isn't one to sit still, she squirms and tries to escape at any opportunity.  As a single parent I have to say that thankfully I was never put in the position where I at least couldn't manoeuvre her buggy out of the way for other parents, or wheelchair users.  In all honestly I don't know what I would have done if someone had asked me to fold down to make space...actually I do, I would have had to get off.  Don't get me wrong I know having children was my choice just as having a disability isn't anyone's choice. 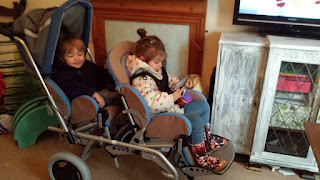 Move forward the next two years and I now have Bella and Logan. Bella is slight enough that she can still fit into a normal pushchair (age 19 months to almost 4 years) and Logan is a newborn up to 2 years. I have now progressed to a double buggy and Bella has her diagnosis. During that time we had a range of buggy's for many, many boring reasons but the crux of the matter is that we took up a lot of space and at no point could I have folded it down.  I always saw those signs saying to make room for a wheelchair if needed but as I've said I don't know what I'd have done if confronted with the situation.

Nowadays Bella is still in her disability buggy (and yes people do a little double take sometimes before they realise that she's disabled.) The train is our usual mode of transport and although our London Midland trains have a designated area for wheelchairs it is a bulk area for wheelchairs, buggies and bikes.  It also seems to be the area that city folk use when the train is full meaning we have to wait for the next train and hope the picture isn't the same.

At the end of the day it all comes down to manners and kindness. I feel frustrated and angry for the disabled person who is left waiting at the bus stop yet at the same time I feel scared for the parent who may start feeling isolated as they can't access public transport either. 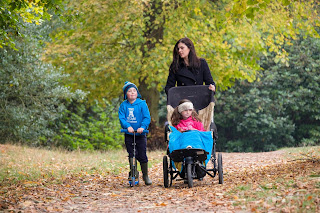 I honestly don't envy bus drivers having to choose between a parent struggling on a bus (as let's face it people don't jump to help you out as much nowadays) and a disabled person with just as much right to travel without a fight.

I designed the Treat As A Wheelchair buggy tags to help people who both use a buggy medically (as NHS wheelchairs are like gold dust) as well as for other wheelchair users to know that we're not just digging our heels in. It's a necessity.
Posted by Mysquarepeglifeblog at 09:32